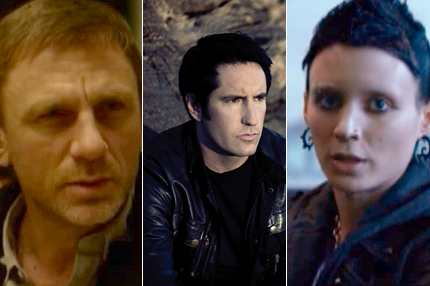 David Fincher’s film adaptation of Stieg Larsson’s bestselling book, The Girl With the Dragon Tattoo, out December 21, is one of 2011’s most anticipated films, and it finds the director teaming up once again with Trent Reznor and collaborator Atticus Ross, who wrote the Oscar-winning score for Fincher’s The Social Network. Now, a new trailer has emerged on Dragon Tattoo’s website, and via YouTube, featuring new Reznor music from the film. Watch it below.

That’s in keeping with Reznor’s early description of the Tattoo soundtrack as processed “in a way that gives it a really interesting, organic, layered feel.” He also noted that the recording was “all based on performance, nothing programmed.”

The latest clip runs three minutes and 42 seconds, and shows more of Rooney Mara’s performance as the punked-out protagonist Lisbeth Salander, Daniel Craig as journalist and authorial stand-in Mikael Blomkvist, and Christopher Plummer as Henrik Vanger, who sets it all in motion by enlisting Blomkvist’s services.