"The View" is the first taste from the unlikely combination's forthcoming collaborative album, titled 'Lulu' and due out Nov. 1. 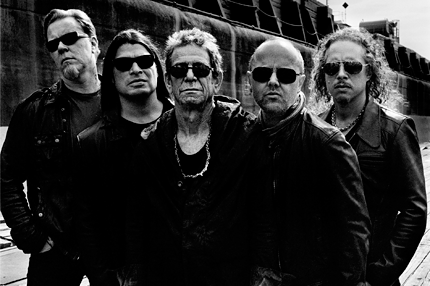 Lou Reed and Metallica have unveiled the first full song from their upcoming album Lulu (out Nov. 1). “The View” will be available from online retailers on September 27. Hear the song below.

The song scans like the latest entry in the ongoing codependent relationship between stars and audience: a kind of Metal Machine Music for an overly self-conscious era. It’s a trudging, half-rapped metal song, with Reed and Metallica frontman James Hetfield trading vocals, and you can read the lyrics here.

“I have no morals / Some think me cheap,” Reed deadpans early in the song, as if preemptively mocking any longtime fans surprised by his collaboration with megastars of Metallica’s fame. Then there’s the song’s equally dispassionate conclusion, which again is tempting to read as self-reference from the enigmatic icon: “I want to have you doubting / Every meaning you’ve amassed / Like a fortune, like a fortune / Throw it away/ For the worship of someone who actively despises you.” Remember when Pavement asked if you could “treat it like an oil well”?

They’ve previously said the album was inspired by German writer Frank Wedekind’s turn-of-the-1900s plays Earth Spirit and Pandora’s Box, which tell a “story of a young abused dancer’s life and relationships,” according to a post on the Loutallica site.

Hear It: Lou Reed and Metallica, “The View”