A download of "Paradise" is available starting today for fans who pre-order 'Mylo Xyloto' via iTunes. 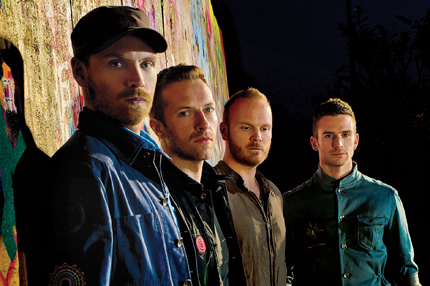 Coldplay has released a lavish new single, “Paradise,” the same day the British rockers revealed the tracklist for their upcoming fifth album, Mylo Xyloto. Hear the song and see the song lineup below.

Coldplay frontman Chris Martin says in a press release the band started writing their new album after listening to Blur’s “Sing,” which appears on the U.K. version of the Damon Albarn-led British popsters’ 1991 debut album Leisure (U.S. fans could hear it on the Trainspotting film soundtrack). And in fact, “Paradise” is built around slowly rotating orchestration that quite a bit resembles the early Blur track’s hypnotic chords.

Martin steps back out in front on the more traditionally stately, piano-driven verses, but the swooning, impressionistic hook again recalls some of that influential Albarn group’s art-school leanings. Martin sings about a woman dreaming of, well, paradise, and the music suggests that feeling of breathless exhilaration; one lyric also refers back to previous Mylo Xyloto offering “Every Teardrop Is a Waterfall.”

A download of “Paradise” is available starting today for fans who pre-order Mylo Xyloto from the iTunes Store. Coldplay has also unveiled the tracklist for the album, set for U.S. release on October 24, and the big surprise is that pop star Rihanna sings on the track “Princess of China.” Brian Eno, who took the helm of 2008’s Viva la Vida, here is credited with “enoxification and additional composition,” while previous Coldplay collaborators Markus Dravs, Daniel Green, and Rik Simpson add production assistance.