Fucked Up & Wavves Kick Off Joint Tour in Boston 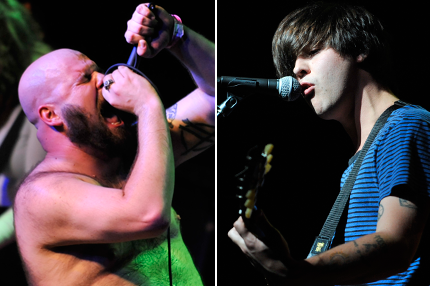 Shirtless and dripping sweat Friday night, Fucked Up’s lead growler, Damian Abraham, stood onstage in Boston and recounted a conversation he had with his wife earlier that day.

“Did you meet up with Wavves today?” she asked him.
“Yeah, we did.”
“Does that mean you’re going to be high for the next two weeks?”
“Yep.”

Abraham and Wavves’ Nathan Williams might be smoking weed together into October, but the joint tour they launched at the city’s Royale was an intense two hours of nonstop stagediving and power-chord-thrashing adrenaline. That’s no surprise for Fucked Up’s melodious brand of hardcore punk, but even Wavves’ lo-fi grit was successfully traded in for a rocked-out opening set that had the crowd moshing nearly as hard as Fucked Up’s elbow-throwing audience.

Though Williams made news for an infamous onstage flameout in 2009, his band made the case in Boston that these days he’s taking the stageshow completely seriously: While many of his songs come with an ironic wink on record (“King of the Beach,” for instance), Williams and crew gave a solid performance that dropped much of the sarcasm. Even songs like “No Hope Kids” abandoned the aloof scuzziness for a Nirvana-like frenzy that left Williams’ guitar strap broken. Wavves’ current rhythm section (bassist Stephen Pope and drummer Jacob Cooper, formerly of Jay Reatard and the Mae Shi respectively) bring the chops to elevate the band from its lower-fi days.

Other Wavves highlights included “Nodding Off” from the new Life Sux EP, which surprisingly didn’t suffer from the absence of Best Coast’s Bethany Cosentino’s duet vocals, and “Post Acid,” which sent the crowd into such hysteria that the soundboard dude looked like he’d freak out. Noticeably absent from the set was Wavves’ recent collaboration with Fucked Up on the song “Destroy.” But look for it on upcoming shows: Abraham and Williams told SPIN that it may appear on later dates.

The headlining set by Fucked Up was a remarkable study in contrasts. Abraham’s guttural snarl balanced well with the ethereal backing vocals of bassist Sandy Miranda on “Queen of Hearts” and guitarist Ben Cook on “Black Albino Bones.”Even when Abraham plowed through the crowd, barking lines like, “Rip the flesh with our gnashing teeth,” he did it with a smile as people ecstatically hugged his sweaty, naked torso.

Later, some idiotic audience member jumped onstage and punched a security guard in the chest. The two of them flew into the crowd with Abraham following behind, wearing a comically small shirt that somebody threw to him. A bystander was kicked in the forehead during the melee and Abraham wanted to make sure the guy was okay.

The band stormed through a stunning take of “The Other Shoe,” inspiring audience members to joyfully sing the chorus, “We’re dying on the inside,” while smiling the entire time.

The concert showcased two very different bands, but the night’s emotions shared similar roots: While Wavves’ lyrics embodied the disaffected boredom of youth, Fucked Up harnessed the anti-establishment rage that youthful boredom can lead to.

Eric Magnuson
Tags: We Were There