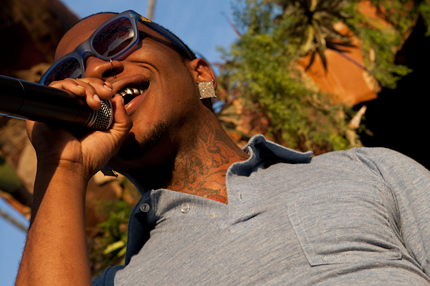 Lil B isn’t slowing down. Without warning, the ever-prolific rapper has released a new mixtape, Black Flame. Hear it below, and download it free over at DatPiff.

Internet downloads like this one have helped Lil B generate an obsessive cult following, making him one of the most closely watched figures in hip-hop. He was previously best known as a member of San Francisco Bay Area skate-rap outfit the Pack, who scored a 2006 hit with shoe ode “Vans.” Read Brandon Soderberg’s article on the MC, from SPIN’s July 2011 Success Issue, here.

Lil B’s current 21-song offering follows closely on the heels of a 12-track mixtape the self-proclaimed Based God put on the Web last month, I Forgive You; in fact, the two releases even share some songs. On July 16, the rapper dropped his hotly debated album, I’m Gay (I’m Happy).

Lil B commented on the latest release, in all-caps fashion, on his bustling Twitter feed. “NEW LIL B MIXTAPE ‘BLACK FLAME’ WORLD WIDE TRENDING TOPIC,” he wrote. “ITS A CLASSSSICC COLLECT THIS RARE HISTORY.”

Black Flame features more of the Based God’s spaced-out, free-associative rhymes, over instrumentals that range from the laid-back piano of “Ms Woman” to the heavily distorted clamor of “Bitch Fuck With Me.”