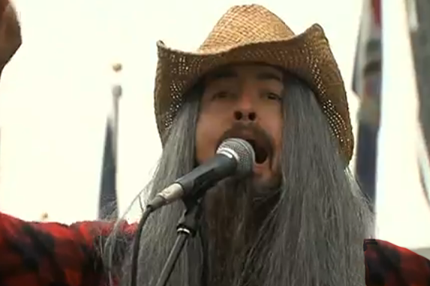 A religious group known for picketing U.S. soldiers’ funerals got a taste of its own medicine on Friday afternoon. The Foo Fighters stood atop a flatbed before their Kansas City show that night and sardonically treated the protesters from Westboro Baptist Church to a live performance, in a counter-protest of the Topeka, KS-based church’s anti-gay views. (via NBC Action News)

Dressed in trucker costumes from their recent “Hot Buns” video, the band members hit back at the protesters with a message of tolerance and American pride. “Land of the free, home of the brave,” frontman Dave Grohl declared at the end of the song, in an exaggerated drawl. “I don’t care if you’re black or white or purple or green, whether you’re Pennsylvanian or Transylvanian, Lady Gaga or Lady Antebellum. It takes all kinds.”

The Foo Fighters posted additional video of the counter-protest on their website, receiving more than 400,000 views over the weekend. The band kicked off a 27-date North American tour earlier last week in St. Paul, MN, in support of latest studio album Wasting Light. The “Hot Buns” song itself is a twangy country spoof with goofy lyrics about “hot man muffins,” in the grand faux-trucker tradition of mid-1990s Blur B-side “Rednecks.”

In addition to military funerals, the Westboro church has also picketed funerals of well-known figures, such as that of Elizabeth Edwards, the late wife of former presidential candidate John Edwards. Missouri and other states have passed laws trying to limit the church’s protests, but have been repeatedly overruled by the Supreme Court on free-speech grounds.