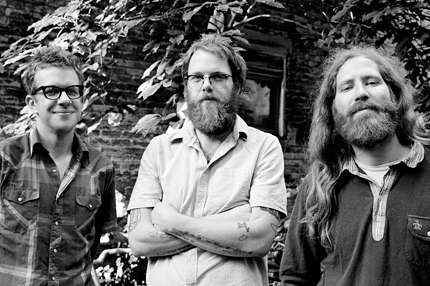 While Durham, North Carolina-based trio Megafaun – featuring brothers Brad and Phil Cook and Joe Westerlund – are sometimes referred to as “the guys who used to be in a band with Justin Vernon, before he was Bon Iver,” they won’t be in their old friend’s shadow much longer. The proof: Their forthcoming self-titled album, due out September 20 on Hometapes. SPIN has a premiere of the track “Get Right,” which you can hear below.

Recorded in Vernon’s own April Base studio, Megafaun’s third album dips into all sorts of styles, from cacophonous free-jazz to stunning piano balladry, but “Get Right” is the sort of tune that could prove to be their big breakthrough: It’s a sprawling, eight-and-a-half minute jam, with the sort of atmospheric, carefree improvisation that calls to mind the Grateful Dead during their peak.

The band will promote their new album with a 16-date U.S. tour, which kicks off on September 22 in Carrboro, NC, and wraps up on October 10 in San Diego. Get full dates here.