The performer/model, aka Lauren Avery, makes her onstage debut at Freak City. 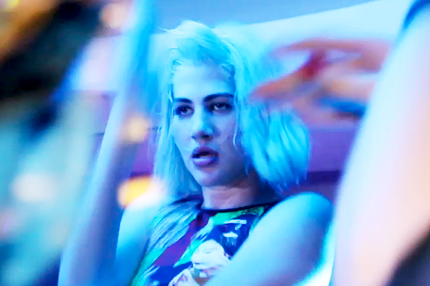 One of those glamorous characters is Lauren Avery, who rolls under the alias “Meg Ryan.” She’s a model, muse, and now a pop singer — check out video of her live debut below. Our team was on hand for the occasion, and this is how Weiss described the scene:

“Midnight was two drinks ago and 200 people still linger at Freak City. The vibe is more ‘debauched brand launch,’ less ‘artist unveiling.’ It is almost a bizarro version of downtown’s the Smell – the art- punk locus famous for bands like No Age and Abe Vigoda. But where the Smell is as Spartan and blue-collar as vegans can get, the vibe here is half Goodwill chic, half bohemian drag queen…

“[T]here is an Asian man dressed up tonight like the Great Pumpkin from Peanuts. Meanwhile, Meg Ryan has changed into a campy Chinese leotard encased in a clear vinyl suit. When I ask why she’s not dressed ’90s, she tells me that her new look is 2001 Bai Ling.

“Finally, Meg takes the stage; whoops and squeals detonate from the flamboyant dancers in the front row. There is vamping, growling, theatrics, and people screaming, “Meg Ryan!” – ’90s camp nouveau. Everyone is sauced…

“When we get in touch a few days later, I ask who were the people chanting her name. She says that she doesn’t know. ‘How do they know you?’ I ask. ‘They know the future.'”

This video previously debuted on SPIN Play, our iPad app, where you can find exclusive clips like this one every month, plus 60 streaming songs, daily news, album reviews, SPIN magazine stories, photos, and other goodies. Find out more.