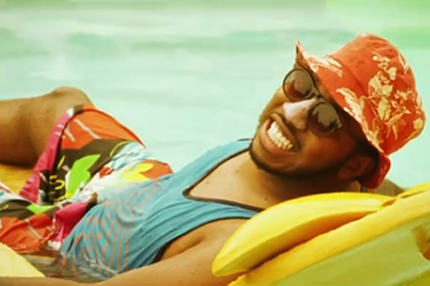 The Cool Kids describe the sound of their long-awaited studio debut, When Fish Ride Bicycles (out now via Green Label Sound), as “beach rap,” and in SPIN’s eight-out-of-10 review we call it an “homage to Chicago summers.” It’s only fitting, then, that in their music video for the aptly titled “Summer Jam” Chuck Inglish and Mikey Rocks, and guest vocalist Maxine Ashley, chill out poolside. Watch the clip below, premiered exclusively at SPIN.

The Windy City rappers have all the fixings for the quintessential summer party: a large pool, float-y toys, partiers dressed in big frog and fish costumes, a pit-bull wearing a pirate hat, snorkels and goggles, a midget sporting a formal suit, synchronized swimmers, a game of croquet, and, of course: “babes, BBQ, babes,” says Mr. Rocks. And the smooth and breezy funk-rap track is the ideal soundtrack, too. Endless summer!