ALL ACCESS: SPIN documents a day in the life of the globetrotting superstar DJ. 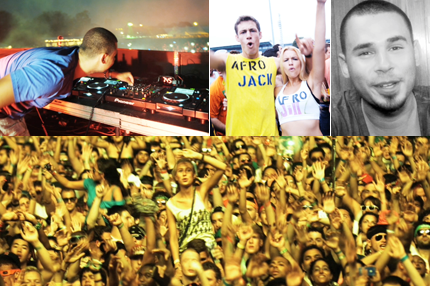 Ever wonder what a typical weekend looks like for a superstar DJ? As part of our Dance Issue, we spent time with Afrojack, aka Nick van de Wall, the 24-year-old Dutch mixmaster and producer best known for his dancefloor hit “Take Over Control,” plus his work on Pitbull’s “Give Me Everything” and Beyonce’s “Run the World (Girls).” Afrojack gave SPIN’s cameras an all-access pass to his recent performance at NYC’s Electric Zoo festival, which drew 85,000 revelers over three days — watch our mini-documentary below.

In the 48 hours prior to his top-of-the-bill DJ set at Electric Zoo, van de Wall flew from Amsterdam to San Diego, performed at the touring IDentity Fest, spun at a hotel afterparty until the cops broke it up, hopped a flight to El Paso, Texas, for another IDentity gig, then jetted to Vegas for a late-night set before zipping back across the country to New York City for one of his biggest American shows ever.

“I slept for like three hours,” van de Wall says of the epic weekend. But lack of sleep didn’t sap any energy from his Electric Zoo gig.

After rocking the decks in New York, van de Wall talked with SPIN about his meteoric rise to fame, from a small town in Holland to globetrotting DJ gigs and Grammy wins. We set his story to a backdrop of Afrojack’s bumping party tunes and amazing footage from the festival.

This video previously debuted on SPIN Play, our iPad app, where you can find exclusive clips like this one every month, plus 60 streaming songs, daily news, album reviews, SPIN magazine stories, photos, and other goodies. Find out more.