London's new it-girl brings the catchy hooks and thumping beats of 'On a Mission' to New York City. 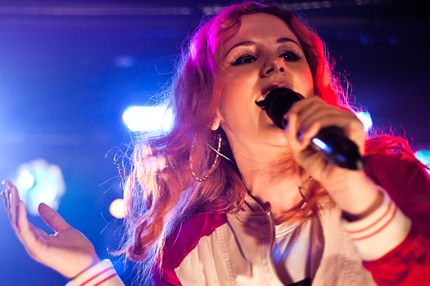 “I’m feeling very emotional,” Katy B confessed Tuesday night from the cramped Studio at Webster Hall in NYC, where the 22-year-old U.K. native and burgeoning queen of dubstep celebrated the U.S. release of her debut album On A Mission with her first stateside concert. The feeling was also transmitted loud and clear in her music.

Katy’s presence is much like her art: unassumingly powerful. She’s a small girl with wavy auburn hair, dressed Tuesday night in a Rinse FM t-shirt in solidarity with her producers at the London pirate radio station, huge gold hoop earrings, and an engagingly playful half-smile.

A graduate of the BRIT School, a prestigious performing-arts institution located in the South London suburb of Croydon that shaped leading ladies from the U.K. pop circuit including Amy Winehouse, Adele, Leona Lewis, and Jessie J, Katy’s alma mater almost works to her detriment. The knowledge alone is enough to warrant comparisons to her peers.

But while she may share the serene vocal stylings of Lewis or the playful stage presence of the late Winehouse, Katy has proved that her style is all her own. And Tuesday night, amid a live set-up of horns, keyboards, drums, and a mixing table, we saw the singer take her show a step further, transforming from a dance vocalist to a full-on dub act.

The night’s set covered the scope of On A Mission, an album that’s parts dubstep, funky drum’n’bass, jungle, disco, and dancehall. Where ’90s era house divas were glorified by addictive and catchy backing tracks, Katy uses her voice to juxtapose the instrumentals. Take the night’s rendition of “Why Are You Always Here,” for example. Despite its driving drum’n’bass back-line, the serenely sung hook [“Why do you persist, supersist my kiss / when she’s the one your heart beats for”] pulls the track away from a potential dance floor scorcher to a restrained, tension-filled plea. This isn’t to say that dance anthems aren’t her forte, but rather that a dance vocalist doesn’t always need to transcend a bassline when they can just as easily play into them.

She hyped the crowd, demanding they dance and “put your hands in the air,” and her band evoked nostalgia for ’80s era ska and reggae acts, complete with extended jam-band interludes between songs. On A Mission is an album largely based in electronic production — a mix of synths, computerized bass, drum pads, and the like. It’s a sound that would seem to be too difficult to re-create live, where real instruments might be unable to deliver the deeply toned bass. Tuesday, however, the live band seemed like a natural fit; a way to experience dubstep in a way that would have made Lee “Scratch” Perry proud.

“Easy Please Me” featured lively bass and sax on swooping octave drops. The gripping sub-bass of “Katy On A Mission” was re-created with a combination of keyboards, an MPC player, and plenty of knob-twisting manipulation. Throughout the night, horns replaced synths, a bass guitar plucked low dance lines, hand-shaken percussive instruments mimicked the whispers behind harder drum kicks.

“You know when you walk into a club and a DJ is playing a tune and everyone’s feeling the same emotion?” inquired Katy B towards the end of the set. The audience could relate, of course, as they eagerly awaited for “Perfect Stranger,” the artist’s biggest hit thus far. As we see it the carefree curiosity and confidence behind the song perfectly encapsulates the entire ethos of the dubstep queen. As an artist, Katy B doesn’t strike you down as much as she invites you to be a part of her world. And in Katy B’s world, clubbing is a way of life.

Setlist:
Louder
Broken Record
Movement
Easy Please Me
Disappear
Go Away
Witches Brew
Perfect Stranger
Why You Always Here
On A Mission
Hard To Get
Lights On

Puja Patel
Tags: Katy B, We Were There