The Soundgarden frontman gave an acoustic performance of "The Keeper," from new movie 'Machine Gun Preacher.' 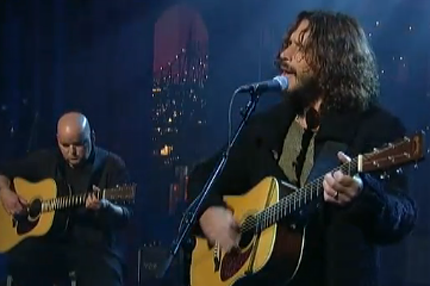 In 1992, just after long-haired Seattle rockers Soundgarden had their first mainstream breakthrough with Badmotorfinger, Chris Cornell could be heard sweetly crooning a delicate acoustic tune, “Seasons,” on the soundtrack to Cameron Crowe film Singles. Now, the electric and unplugged sides of the husky-voiced frontman are converging once again, as Cornell heads out on a solo acoustic tour just as reunited alt-rockers Soundgarden prep their first album in 15 years. The acoustic balladeer took precedence last night, when Cornell played new song “The Keeper” on The Late Show With David Letterman. Watch it here (via The Audio Perv).

From the soundtrack to new action movie Machine Gun Preacher, “The Keeper” is slow, ruminative folk-pop from the perspective of a world-weary wanderer. “It doesn’t take too long for this road to become a battlefield,” Cornell sings with a gentle rasp. On Letterman, the song leaves ample room for the rocker to show his voice’s prettier side as the tune comes to a honeyed, ooh-ing conclusion. Cornell wasn’t completely solo, though; as Letterman nudged him to reveal, he was joined by a second acoustic guitarist named Alan.

Cornell told SPIN earlier this year he will be playing Soundgarden songs on his acoustic tour. “An acoustic show is all about you, and any little nuance or mistake is amplified,” he said. “I think Johnny Cash was quoted as saying, ‘It’s the scariest thing you could do as a musician.’ I’m very nervous about it, but I love the intimacy.”

Not that Cornell has been limited to his own band’s catalogue. The singer popped up unannounced with fellow Seattle icons Pearl Jam during their 20th birthday, performing material from Temple of the Dog, the all-star band that merged Soundgarden and Pearl Jam.