With fans like Drake and Radiohead, this masked dance maestro won't be a secret for long. 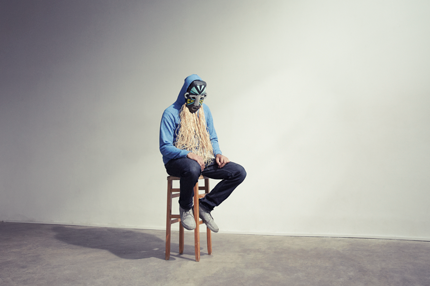 For someone who wants to stay hidden, SBTRKT (pronounced “subtract”) has a hard time staying in the shadows. The mask-wearing DJ-producer won’t confirm his real name (reportedly Aaron Jerome), age, or talk about his musical background, but he has shared a stage with Drake, been tapped for remixes by Radiohead and Mark Ronson, and will be headlining a U.S. tour that launches this month. A little ?secrecy, it seems, can go a long way.

“SBTRKT is essentially about getting away from the idea that you have to talk about your music to show what it’s about,” explains the London resident. “For me, it was more about creating music and letting it work on its own merits — not having to go out and say, ‘I am the person behind ?this, this is where I was born, and ?this is why I make what I do.’?”

Good thing his music speaks for ?itself. SBTRKT’s eponymous Young Turks debut puts a sleek pop slant on dubstep, garage, and 2-step. Closer to the futuristic singer-songwriter music of fellow Brit James Blake than straight-up club fare, the album leans hard on the airy croon of U.K. soul singer Sampha, who also joins in for his boss’ free-flowing shows, during which the masked man pounds a drum kit. “It can all go wrong,” admits SBTRKT about embracing the unpredictability of playing live, “but it can all go right as well.” Like when Drake joined the band for a Toronto performance. (“He just came and jammed,” says SBTRKT.) The cameo wasn’t wholly surprising — Drake had remixed SBTRKT’s moody “Wildfire,” which features a feathery vocal assist from Little Dragon’s Yukimi Nagano.

More often, SBTRKT is the one ?doing the remixing. Last year he ?reworked Tinie Tempah’s U.K. No. 1 ?single “Pass Out” and Ronson’s “Bang Bang Bang.” This past summer, he did the same to “Lotus Flower,” from Radiohead’s recent The King of Limbs, after Thom Yorke heard his music on BBC ?radio. Cultivating such a high-profile fan base may put a crimp in SBTRKT’s plan to remain anonymous, but it’s the stuff of fantasy nonetheless — which is appropriate for his chosen genre. “As a basic thing,” he says, “electronic music is not based on some personal life story. The majority is this imaginary universe of sound.” These days, though, reality is looking pretty good.
BUY THIS ISSUE
Read the entire October 2011 issue of SPIN.