Bowie-loving Detroit ?rapper hopes to earn a place in the pantheon. 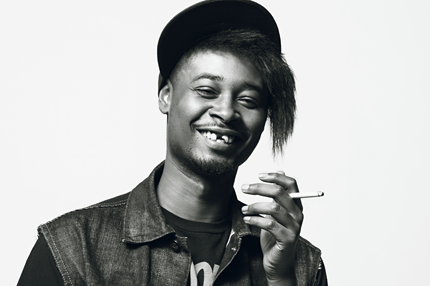 Detroit rapper Danny Brown smokes two blunts every morning, but that’s not excessive. After all, he’s the self-proclaimed “Adderall admiral” — a profane, pill-popping ex-crack dealer with a love of Sufjan Stevens and nasally nail-gun raps.

Hearing him tell it, though, after lighting up a Swisher Sweet on a sunstroked summer morning in West Hollywood, things are nicely even-keeled at the moment. This year, Brown signed to Fool’s Gold Records, after three celebrated mixtapes that included collaborations with Lil B, underground king Black Milk, and Tony Yayo. Even 50 Cent became a fan. “50 Cent’s a songwriter,” says Brown. “He understood and liked my music, but he didn’t understand me.”

Looking at Brown, 30, it’s easy to see where some confusion might arise. He’s wearing a teal sweater, white skinny-jean cutoffs, and Air Jordans. One-and-a-half front teeth are missing and his hair swooshes like a sine wave. The effect is half battle-scarred street rapper, half Station to Station-era David Bowie. In fact, the Thin White Duke’s influence moved him to choose the stylish Brooklyn cachet of Fool’s Gold — the home of Chromeo and Cool Kids — over competing offers from other labels. “I studied how Bowie’s career didn’t take off until he found the right look and the right crowd,” Brown says.

The indie imprint’s scenester-skewing roster is a natural fit for an artist equally at home praising E-40 and Arthur Lee’s Love. One who raps about the perils of teen pregnancy and drug abuse, as well as the perils of strolling around downtown Detroit wearing Cartier sunglasses.

That eclecticism appears to be paying off. He’s in town to shoot a video with labelmate Kid Sister and has a fall tour planned with Das Racist. (He also guests on the New York trio’s Relax.) His debut, XXX (free download here), seeks to solidify his spot as one of the best MCs breathing with its balance of snarling humor, rage, and eerie meditations on aging and addiction. “Since I was a kid, I’d wake up every morning hearing a voice say, ‘You’re the greatest rapper ever,’ says Brown. “I’m trying to prove that voice right.”
BUY THIS ISSUE
Read the entire October 2011 issue of SPIN.