Zach Condon weaves together a world's worth of influences into something special, kicks off first tour in four years. 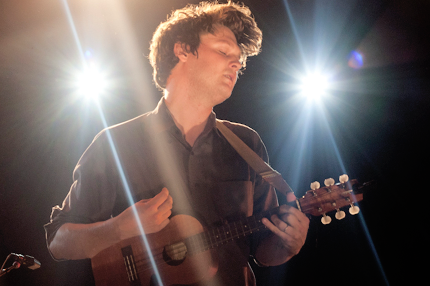 It’s hard to figure out exactly where the baroque boom of 2006, spearheaded by Zach Condon’s band Beirut, fits into today’s indie rock landscape, which feels dominated by fuzzed out guitars, icy synths, and the blips and whirs of arcade machines. But judging by the 3,000-strong turnout at Manhattan’s Terminal 5 on opening night of Beirut’s first tour in four years, there’s definitely room for brass and strings in 2011.

The reason for this is simple: Condon and his band have never stagnated. It’s easy to think of Beirut as the same weird group that played Balkan folk music on their debut, Gulag Orkestar, but they’ve actually kept growing, adding new (but old) sounds to the mix, like French or Mexican music from the early 20th century to this year’s The Rip Tide.

It’s not just the influences that have changed, though. Condon evolved as both a songwriter and singer. His compositions have become more lush and intricate, eschewing mimicry and instead utilizing traditional, globally sourced music as a starting point to create something unique and defiantly Beirut. But Condon’s maturation is evident mostly in his voice. In 2006, he sounded like a boy affecting the deepest voice he could muster, but now he’s perfected a smooth croon that resonates even after the song finishes.

This was on full display at Terminal 5, where the band kicked off their first tour in four years. Over the course of 24 songs, Condon led the audience through a guided tour of his band’s development, touching on all three studio albums and a handful of EPs. The typical responses varied from tipsy waltzing with significant others, to boozy sing-alongs conduced by fans holding glasses of wine and clutching at their hearts. Oh, and don’t forget the trumpets. As far as firing up a crowd, a jubilant brass solo served as Beirut’s equivalent of “more cowbell.”

Despite it being a home show of sorts — after years of drifting, New Mexico native Condon is now based out of Brooklyn — stage banter was next to non-existent, with the band choosing to let their oeuvre do the talking. “East Harlem,” the strong lead single from The Rip Tide, demanded as much attention as Gulag’s “Scenic World,” or the charming “My Night with the Prostitute from Marseille,” from 2009’s Holland EP. Only when he emerged for the band’s second encore — yes, second — did Condon open up slightly, laughing as he told the crowd, “You’re bleeding us dry, I can’t think of another song to play.” Luckily the band still had two songs left, welcome news to the majority of fans who’d stuck around hoping for more.

But Condon does keep thinking of new songs, and maintains his studious fascination with sounds across all borders, and whips up new ways to weave it together. And that’s what will keep Beirut in the mix, regardless of what newfangled subgenre is tearing up the blogosphere.

Bryan Hood
Tags: beirut, We Were There