The latest prize for the Canadian collective's third album, 'The Suburbs,' comes after a Grammy Award for Album of the Year. 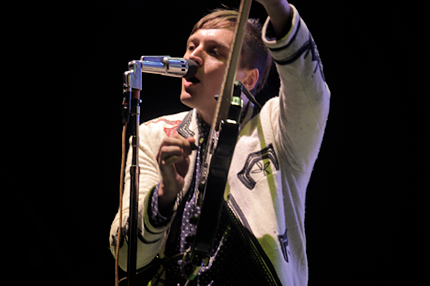 Arcade Fire took home the 2011 Polaris Music Prize last night for third album The Suburbs. The Montreal collective beat out nine other nominees for the honor, given to the best Canadian album of the year, including iconoclastic indie-rock wordsmith Destroyer, enigmatic R&B act the Weeknd, hypnotic electro-pop trio Austra, and dream-pop sirens Braids.

The Polaris victory adds to Arcade Fire’s impressively full trophy cabinet for The Suburbs, which landed at No. 3 on SPIN’s Best Albums of 2010 list. The album previously won the Grammy Award for Album of the Year, and received similar honors from the Juno Awards (a Canadian equivalent to the Grammys). The Brit awards, Britain’s answer to the Grammys, named The Suburbs the Best International Album.

Arcade Fire released a deluxe edition of The Suburbs in August. The expanded edition includes two new tracks — “Culture War” and the David Byrne team-up “Speaking in Tongues” — plus extended versions of “Wasted Hours” and other songs.