10 Thoughts on Radiohead Live in NYC

Thom Yorke and Co. remind us why they matter in their first U.S. concert date since 'The King of Limbs' was released. 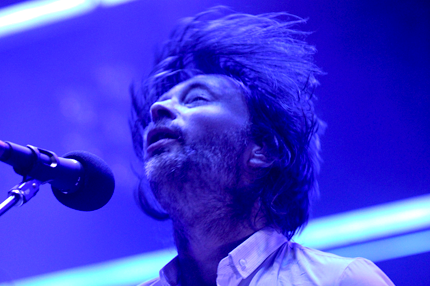 As they do so often, Radiohead startled fans by announcing last week that they would play two last-minute shows at New York City’s Roseland Ballroom on Sept. 28 and 29 — their first U.S. performances since the release of The King of Limbs earlier this year. The band was in town to play Saturday Night Live’s season premiere last Saturday and to appear on The Colbert Report on Monday. Still, few thought they’d play a real, you know, actual gig — they weren’t touring, after all. But, of course, Thom Yorke had other plans up his natty sleeve.

So, before the last note of set-closer “Nude” completely fades from our ears, here are a few scattered thoughts on last night’s pleasant surprise.

1. The guy who traveled 1,376 miles to see Radiohead and didn’t have a ticket — as his sign so helpfully explained outside Roseland before the show — needs to read the fine print. No one’s going to sell you a ticket. It’s all Will Call, bro.

2. Well, now we know which band Bradley Cooper and Philip Seymour Hoffman can agree on. Cooper was spotted, um, dancing.

3. Why haven’t Radiohead put “The Daily Mail” on a proper album yet? It’s one of the best songs they’ve ever written — a sinister, gorgeous, piano romp that ends like Sgt. Pepper tussling with Fugazi.

4. We love Thom Yorke’s new, greasy long hair — and guitarist Ed O’Brien’s too. When Yorke shook and shimmied his way through “The National Anthem,” “15 Step,” and “Myxomatosis” — his mop flying all around — we felt a serious twinge of alt-rock nostalgia, a reminder that Radiohead was just one of the long-haired masses all those years ago.

5. And speaking of hair, Radiohead somehow found another bald, white, insanely talented British drummer! Phil Selway and new touring stickman Clive Deamer (who has previously worked with Portishead) looked like identical twins with their kits placed at opposite ends of the stage. “Weird Fishes/Arpeggi” never sounded as propulsive as it did last night.

6. Radiohead now are more of a dance band than a rock band. At Roseland, new tunes like “Morning Mr. Magpie” and “Lotus Flower” were all sweat and manic rhythm. For every guitar solo Jonny Greenwood used to rip back in the day, there was another clever polyrhythm from Selway or Deamer. And Yorke never, ever stopped moving. Neither did the crowd.

7. Is Yorke a good dancer, a bad dancer, or both? Whatever he is, he’s entertaining, even adorable, to watch. He told the crowd that he realized he’d finally become “an embarrassing dad” after seeing the video for “Lotus Flower,” which features Yorke in all his jive-stepping glory. So maybe he’s just a good dancer for a 42-year-old with kids?

8. Radiohead aren’t a studio band. Yes, they spend long, painful months in stuffy rooms crafting meticulous odes to post-millennial angst. But they dispense with all the bullshit live, while remaining breathtakingly inventive. Take “Feral,” for example. A cold, claustrophobic instrumental from The King of Limbs became a seething, seemingly improvised fire-breather on stage with Greenwood’s vintage guitar heroics.

9. It’s actually pretty endearing when a band screws up, particularly one as fussy as Radiohead. Yorke skipped a verse on “Reckoner” and forgot the lyrics to “Street Spirit (Fade Out)” during the second and final encore. But it was all right. The man apologized. We all cheered. The show went on.

10. Radiohead know how to pay respects to their friends. Before diving into “Everything in its Right Place,” Yorke — a long-time confidant of Michael Stipe — ran through a few verses of R.E.M.’s “The One I Love” at the piano. “This one goes out to the one I love / This one goes out to the one I’ve left behind,” he sang, the crowd hushed. R.E.M. lasted 31 years before they called it quits. Radiohead might have similar staying power.

John Macdonald
Tags: radiohead, We Were There