The rap titans team up with the Beastie Boys' favorite video director for first 'Watch the Throne' clip. 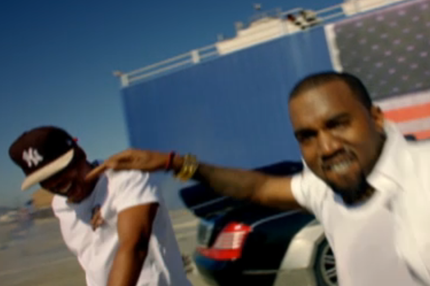 Jay-Z and Kanye West’s collaborative album Watch the Throne is garish and glorious, exquisite and exasperating, the kind of expensive-sounding record that pisses excellence even as it pisses you off.

So naturally the hip-hop titans would need a flashy, big-ass music video to match their over-the-top album – and they’ve roped in none other than film wizard Spike Jonze to direct the clip for the first single “Otis,” which premiered on MTV tonight. Watch it here.

It makes sense that Jay and West would tap Jonze for “Otis.” He’s the industry’s go-to for high-concept videos, including the Beastie Boys’ “Sabotage,” Björk’s “Triumph of a Heart,” Fatboy Slim’s “Weapon of Choice,” and, most recently, the Beastie’s action-figure-themed clip for “Don’t Play No Game That I Can’t Win.”