Watch the first-time director's 'West Side Story'-esque treatment for "Our Deal." 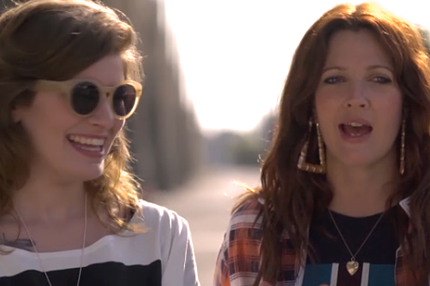 Starring Chloe Moretz (Kick-Ass), Donald Glover (Community), Tyler Posey (Teen Wolf), Miranda Cosgrove (iCarly), and Alia Shawkat (Arrested Development), the clip is like a condensed version ofWest Side Story. It tells the tale of two members of rival street gangs, the Day Trotters and the Night Creepers, who fall in love and keep their passion a secret… until the deadly final act.

In an interview with MTV (see video below), Barrymore says the clip’s plot mirrors the song, a sunny girl-group-inspired pop jam about a broken pact between lovers, from 2010’s Crazy For You: “I wanted to do a story that fit into that, where you can’t really tell what era you’re in… I wanted to make a mini-movie out of this extraordinary song that moves me.”

Watch the video below, plus an interview with Barrymore and Best Coast’s Bethany Cosentino, and behind-the-scenes footage from the shoot.