Growing up weird in a blue-collar hockey town, John O'Regan transformed himself into something sparkly and unbreakable. 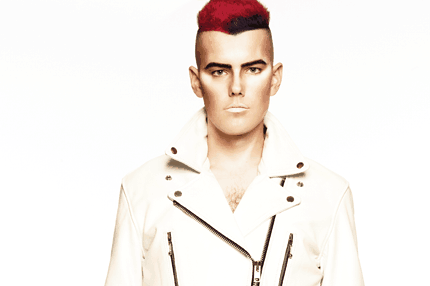 Shy and confused, John O’Regan couldn’t figure? out who he was, before a health scare forced him? to look inside. Now he’s impossible to miss.

John O’Regan’s teenage years were typical, insofar as they sort of sucked. Growing up in Oshawa, Ontario, an automotive-industry city 30 miles northeast of Toronto, he didn’t go to many parties or go on many dates, and his basketball teammates sometimes called him faggot. Quiet and introspective, in a place far more likely to embrace goalies than budding glamsters, he wasn’t sure how to start becoming himself. Today the 26-year-old force behind the irresistibly catchy, visually striking synth-pop project Diamond Rings has no such problems.

It’s early summer and we’re on a Lake Ontario beach, not far from O’Regan’s Toronto apartment. Naked toddlers are frolicking in the sand. In the distance, a Christian rock band is performing at a picnic, badly. “I don’t know how that’s allowed,” says O’Regan, gesturing toward the musicians. He’s wearing a Blue Jays baseball jersey with cutoff sleeves and picking at his black skinny jeans with his cherry-red nails..

The songs on Diamond Rings’ debut, Special Affections, released last October by Montreal’s Secret City, and then again in June by Astralwerks, aren’t exactly church-picnic material. Over bumping beats, O’Regan sings in a wounded baritone about broken relationships and the hollow pursuit of late-night pleasures. Despite the lyrics’ confessionalism, the songs are a neon riot, surging forward on bright melodies and sweeping keyboard lines. The music proved pop-friendly enough for Robyn to pluck Diamond Rings as her opener on the entire North American leg of her Body Talk tour. O’Regan performed, as he usually does, playing keyboard and guitar to backing tracks, dressed in tights, sports jerseys, and high-tops, his face painted in rainbow colors, fully embracing the flamboyance he’d long harbored.

The only child of a General Motors employee and an elementary school teacher, O’Regan started making music when he left Oshawa for art college in nearby Guelph, Ontario. There, he got deep into Devo and David Bowie — and found a girlfriend, with whom he formed a lo-fi electro-pop act, Habitat. (Around this time, he realized he was also attracted to men.) As he absorbed his idols’ histories, he worried that his formative identity issues weren’t adequate autobiographical grist for an artistic career. “I was obsessed with reading about new-wave and post-punk musicians,” he says, “and almost feeling guilt for not having a backstory full of hardship.”

But hardship found him. In 2008, O’Regan collapsed before a Toronto show by his punk band, the D’Urbervilles. (He was performing in T-shirts and flannel back then.) After being diagnosed with Crohn’s disease, he had a foot-long piece of his intestine removed. He spent the summer in the hospital, alone with his books and guitar, mulling over who he’d be when he was healthy. Deciding that he was bored with indie’s frumpy aesthetics, he composed the Diamond Rings material.

“I had more time to think about how I was going to make things happen,” he says about his hospital stint. “I came out with a sense of urgency that would have been lacking had I spent the summer drinking in the park. I decided to do something no one else in the city was doing.”

In mid-2009, Diamond Rings got some shine when the video for the fizzy “All Yr Songs,” which showed O’Regan shimmying in eye shadow and a pink tank top, earned more than 200,000 YouTube views. Soon ?after, he had a record deal.

“There aren’t that many musicians embracing this David Bowie thing,” says fellow Ontarian and Arcade Fire collaborator Owen Pallett. “To see someone like John, who is not only singing in a baritone, but getting out there with makeup and glitter…I think it’s absolutely fantastic.”