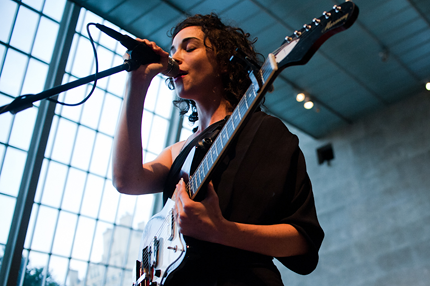 “I think we’re having a little help from antiquity,” cracked St. Vincent, the priestess of the hour, gazing reverently at the Egyptian ruins that comprised her stage.

It was a contradiction of size that the deity-fearing Egyptians would have appreciated: The towering Temple of Dendur, an Egyptian sandstone edifice built during the reign of Julius Caesar, set opposite the frail yet ferocious New York-based singer-songwriter born Annie Clark. In fact, the temple, one of the most celebrated permanent exhibits of the Metropolitan Museum of Art in New York, was utilized Thursday night as an eleventh-hour substitute for the equally picturesque rooftop of the museum, which was plagued all afternoon by the foreboding rain of pre-hurricane Manhattan.

The regal evening marked the first New York performance of St. Vincent’s third record, Strange Mercy, out September 13 on 4AD. It was staged by Spectrum, the Met program that unites contemporary artists with the museum’s collections, and sponsored by Rekya Vodka and Harpoon.

St. Vincent’s album, a quixotic and beautiful blend of acidic rock distortion and her cherubic, airy falsetto, made the difficult transition to the museum space quite ably: Clark began her set with the dryly self-flagellating “Cheerleader,” a standout track that begs for self-actualization as it winks through a colorful repentance. It was a shrewd introduction, as the track built from echoing, plaintive guitar strums into the scabrous fuzz Clark favors so much on Strange Mercy; it bore the momentum for what would be the dense, aching tension of “Cruel” and the arid yet bass-heavy album opener, “Chloe in the Afternoon.”

The cavernous hall was a difficult one to command sonically, and Clark’s soundsystem did suffer from the real estate: Her guitar parts folded back upon themselves in awkward delay, for which her band – Toko Yasuda on mini moog, Matt Johnson on drums, and Daniel Mintseris on keyboards – worked unflinchingly to compensate.

It was all the more incongruous, in that sense, that the diminutive Clark commanded her stage visually. The reliably stylish singer (clad in an asymmetrical buckled black dress) moved with unsuppressed intensity through her fleet guitar hooks, jack-knifing with formidable speed over her strings and returning to her microphone with a broad smile, her Botticelli curls mussed. It was a giddy, entertaining contortion.

Strange Mercy’s Manhattan debut was not without awkwardness. Clark’s introduction of “Champagne Year,” her languid, heartrending ballad of disappointment (on par with the superb “All My Stars Aligned” on 2007 debut Marry Me), was met with utter silence, which the singer nodded away, unfazed. “Now it just sounds forced,” she chided with a grin as the audience cheered belatedly.

It segued very well into the album’s title track, her most extravagant songwriting experiment to date: a lullaby from the distraught wife of an incarcerated man to their infant son, hinging on the softly devastating line “Oh little one / Your Hemingway jawline looks just like his” (which Clark delivered with a fittingly clouded gaze).

Her older selections – the cheekily self-destructive pop of “Save Me from What I Want” and the raging, post-punk “Marrow” (both from 2009’s Actor) were adroit and frantic in all the right ways.

Clark’s greatest asset as a songwriter remains her deft manipulation of heavy instrumentation against her feathery vocals. Strange Mercy marks her experimentation at its finest, and its New York debut was a properly curated affair — overwhelmed slightly by ancient opulence, yet grounded in sincere skill.

Watch It: “Year of the Tiger” (fan footage from the Met)

Stacey Anderson
Tags: st vincent, We Were There