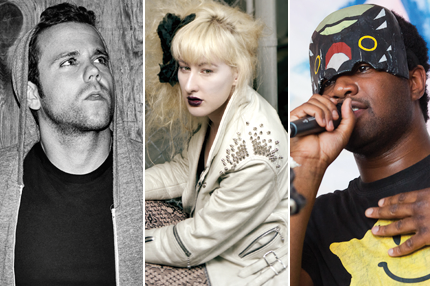 Every month, SPIN editors hit the clubs, troll the web, and listen to copious amounts of advance albums to uncover the best new tunes of the moment. Here are this month’s hottest tracks: Read about the songs below and use the player to hear them all.

1. Tabi Bonney, “Parachute”
This MC’s pickup lines are regular-cat corny, but Ski Beatz’ jazzy, undulating beat is so fabulously suave that it’s on, regardless. (YouTube)

2. Pictureplane, “Post Physical”
The sort of organically swoony electronica crossover that a thousand duos of DJ monkeys couldn’t concoct with any regularity in 1998. (YouTube)

3. M83, “Midnight City”
The soothing sound of all the creeps in ‘Grand Theft Auto: Vice City’ rolling on E and hugging it out instead of murdering each other. (YouTube)

5. Veronica Falls, “Come on Over”
A tastefully paced stampede of romantic shambling from this Pastels-loving Glasgow coed quartet. (YouTube)

8. Balam Acab, “Apart”
Another ghost-world R&B conjurer – from Mechanicsburg, PA! – who lures you into a primordial swirl of dazed bass and sensual static where doves sigh. (YouTube)

10. Kendrick Lamar, “Fuck Your Ethnicity”
The rare conscious uplift anthem that dazzles you with its array of vocal tech- niques, sates you with a hook, and just lets the message ride. (YouTube)