The short movie will be featured on limited-edition box set, out in October. 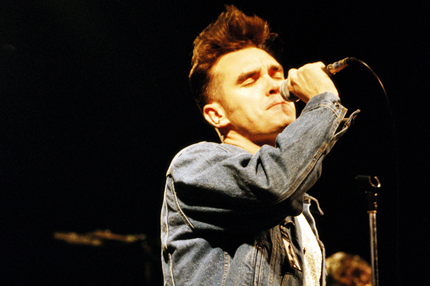 Rhino UK is prepping a massive, limited-edition box set for the Smiths this October, which will feature remastered versions of eight albums on CD and vinyl, reproductions of 25 7-inch singles, and loads more ephemera. One of those extras is a 17-minute 1992 documentary about the band, which has been rarely seen until now. Watch it here.

Originally released to the press, the video traces the group’s rise from their beginnings on Rough Trade and the release of their controversially-titled 1985 album Meat Is Murder through their demise in 1987. (Evidently, Meat is Murder “radically increased the number of young vegetarians everywhere,” according to the voiceover.) There’s some cool live action (fast-forward to the 13:00 minute to see Moz in prime hip-swiveling action) and fascinating shots of the band, sporting very-’80s threads, as they hang around the streets of their Manchester hometown.

Watch It: The Smiths Documentary