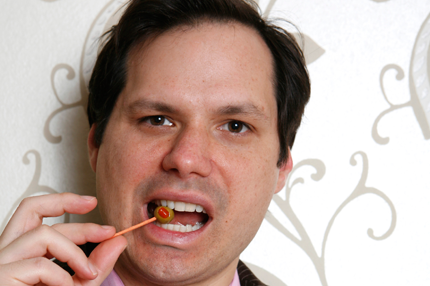 Michael Ian Black is the first to admit that he isn’t technically “very famous,” which is why he called his first stand-up special precisely that. “I try to keep the bar as low as humanly possible,” says the comedian, who is perhaps not immediately recognized as the star of a number of short-lived TV shows, including The State, Stella, and Michael & Michael Have Issues (all co-starring Michael Showalter), as well as a regular talking head on VH1’s I Love The… series. “I feel like I’m just proceeding at my normal pace of — I don’t want to say mediocrity, but I’ll say it: Mediocrity.” Jokes aside, the humbly funny Very Famous, premiering Saturday on Comedy Central, kicks off his autumn-long Black Is White tour and coincides with the tenth anniversary of Wet Hot American Summer, a movie from Black’s resume that is probably more beloved now than when it was released. SPIN talked to Black about how all this attention has had no effect whatsoever on his ego.

What made you decide, after all of these years, to do your own stand-up show?
I’ve been slowly trying to make myself hilarious for the past two or three years so my agent just went to Comedy Central and said, “Hey, do you want to do a special with him?” And I assume they said, “Since we cancel every single one of his television shows, we feel like we owe the guy something.”

Speaking of, when you consider hilarious shows like Freaks and Geeks and Party Down, don’t you feel like you’re in good company in terms of getting canceled?
Well, I mean, there’s also plenty of terrible shows that get canceled. Lots of people die, too, and we always say, “Oh, only the geniuses die.” But plenty of idiots die.

True, and most of them get a glowing obituary because that’s the nature of these things.
I feel like my career has been a series of glowing obituaries.

Your comedy troupe Stella just hosted a celebratory screening of Wet Hot American Summer in Brooklyn. Would you have expected this film to be so honored a decade later?
I’m not surprised that it’s found an audience. Nor was I surprised that it totally bombed at the box office. But I guess I’m surprised that its popularity continues to grow. I don’t know why people like it so much. I can’t take all the credit, but I’ll take most of it. It was a really fun experience. It was literally like going to summer camp, but nobody was telling you that you couldn’t drink.

Was it also like summer camp in the sense that there was a popular crowd?
No, everybody got to be the cool kids. Nobody was excluded from that, except for Paul Rudd because he was a douchebag.

[Laughs] I read somewhere that Michael Cera is rumored to have been in the movie as an uncredited extra. Is that true?
That’s an urban legend.

Both the comedy special and your 2008 book, My Custom Van and 50 Other Mind-Blowing Essays that Will Blow Your Mind All Over Your Face, are firsts for you. Which medium do you feel most comfortable in?
Well, both start with the writing and it’s just the way you construct the written word versus the performance — look, I don’t fucking know. They’re both fun. With stand-up you get the immediate feedback, which is great. But when you write a book, you get to put it on your shelf, and that’s also great, particularly if you have shelves.

Is your relationship with Michael Showalter really as adversarial as you guys advertise?
We don’t hang out that much, mostly because he has social anxiety and I have social anxiety. But we talk all the time and at the moment we’re working together on something. Our friendship is largely based in work, and I think that’s true for a lot of guys.

Comedians have a reputation for being very grumpy, depressive people in real life. Has that proved to be true in your experience?
I can’t speak for all comedians. I think it used to be true for me, but it’s not true now. I have a good family and I like to be home with them. The older I get, the lazier I get, and the more content I am to sit at home and eat string cheese.

I Love The Second Decade of the 21st Century? That’s catchy.
I recognize that it might be wordy, but it is technically correct.

Do you have any idea at this early stage what we might love about this period?
Casey Anthony is the only thing that matters this year. Her and any of the Real Housewives. I mean, she’s the realest of housewives.

With the success of Bridesmaids and the popularity of Tina Fey and Amy Poehler, women in comedy are said to be having a moment right now. Do you think that’s the case?
Women are finally getting their due. I wouldn’t say they’re having a moment because that might sound patronizing and sexist. I don’t know why you hate women so much.

What’s your favorite comedy on television right now?
I don’t watch that much comedy. I think it’s professional jealousy. That and a lack of support for my community.

Will your upcoming tour use the same material from the comedy special?
No, it’s supposed to be new stuff. And I’m hoping that turns out to be the case. I haven’t started working on it yet and considering that most people spend a year or so putting together an hour of material, I would say it’s not going well.