MTV host Sway guests as the Brooklyn rap duo pays homage to the 1979 cult classic in clip for "Moshpit." 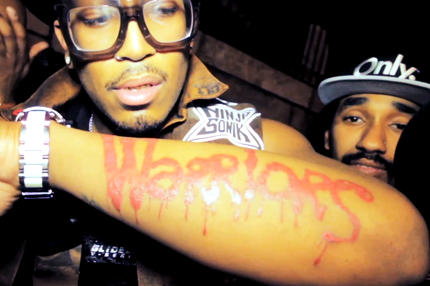 “Can you dig it? Caaaaaan youuuuu digggggg iiiiiiiittttt?” You’ve probably heard it sampled a dozen times, but in case you didn’t know, it comes from The Warriors, the campy 1979 cult classic about gang warfare in NYC. Now, Brooklyn rap duo Ninjasonik have paid homage to the movie in their video for “Moshpit,” off the just-released mixtape, No Swords or Masks. Watch it here.

A familiar face handles the “Can you dig it” scene — it’s MTV host Sway, whose bellowing baritone mimics Cyrus, the character from The Warriors. Then, battles break out across the city, including a rowdy chase scene across the Williamsburg Bridge bike path, but in Ninjasonik’s version, some of the gangs have mastered the technology of light sabers. Awesome!

The track — which you can download with the rest of No Swords or Masks here — is a party anthem with a grinding house groove, espousing the virtues of boozing, smoking, fucking in bathroom stalls, and other nocturnal pursuits.