The joint set, titled 'Lulu,' will be released on November 1 and is inspired by German writer Frank Wedekind's plays. 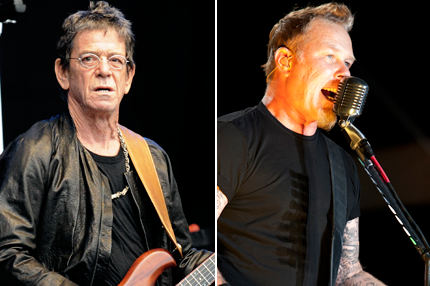 Lou Reed and Metallica’s forthcoming collaborative album now has a release date and title, after the two unlikely partners announced the set in June — and it looks to be one of the more ambitious albums of the year. The joint effort will be titled Lulu and will drop on November 1, the pair announced on their website.

“Loutallica,” as they are dubbing themselves, revealed the record was inspired by German writer Frank Wedekind’s turn of the century plays Earth Spirit and Pandora’s Box. Together, the works tell a “story of a young abused dancer’s life and relationships” and are commonly known as the Lulu Plays, they said in a post on their site.

Reed originally sketched out the project for a theatrical production in Berlin, Germany, but asked Metallica to join him after performing for the Rock and Roll Hall of Fame concerts in New York in 2009. They laid down the tracks at Metallica’s California studio and it was put together with “lightning speed for a Metallica-related project.”

Loutallica have yet to reveal a tracklisting, but NME reports that three cuts will be called “Pumping Blood,” “Mistress Dread,” and “Junior Dad.”

As SPIN previously reported, Metallica are also celebrating their 30th anniversary this year and will play four shows at San Francisco’s Fillmore the week of December 5. Expect the band to bust out career-spanning sets — and potential live collaborations with Reed. “These unique shows will include special guests and events, rare songs, varied set lists, odds and ends, and all the nutty stuff you expect from Metallica,” the band said.