"[It's] the biggest disco party you could imagine," guitarist Josh Klinghoffer says of "Monarchy of Roses." 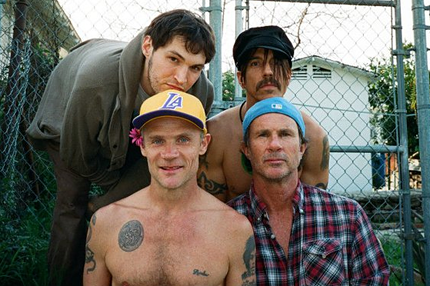 Red Hot Chili Peppers’ first new album in five years, I’m With You, is set to drop on August 29 — and the perennially-shirtless Los Angeles surfer dudes have unveiled another new track in advance of its arrival. Hear”Monarchy of Roses,” which debuted early Monday morning on the band’s hometown rock radio station KROQ.

The track “rides a sleek disco-rock bass riff by Flea, whose recent stint in Thom Yorke’s future-funky Atoms for Peace seems to have made an impact,” we wrote in our seven-out-of-10 album review.

In the video interview with KROQ below, RHCP’s new guitarist Josh Klinghoffer discusses the creative process behind the song, which, he says, all started with Flea’s bass line: “[We were] crouched on our knees in Flea’s basement. He started [mouths bass riff] and I just started doing those wacky medley chords…. We were taking hikes up Los Feliz by Griffith Park, talking about how excited we would be if we saw a band start [mouths same bass riff] and just break out into the biggest disco party you could imagine. And we did…”