Electro-folkie and dubstep prodigy preview first song from upcoming album -- and it's a bit of a let down. 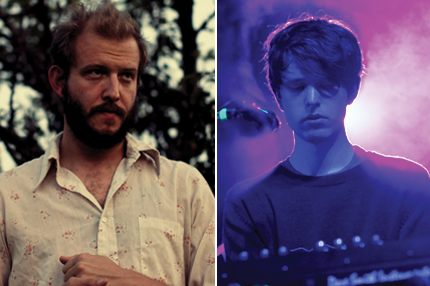 Bon Iver’s Justin Vernon and British dubstep whiz James Blake made two of this year’s best albums, both self-titled, both self-assured. Vernon’s enchanted, electro-folk opus and Blake’s exquisite, futuristic, alien gospel collection each boast sparse arrangements and digital wizardry that amplify their soul-baring. But on “Fall Creek Choir Boys,” the first taste of the duo’s so-far undetailed collaboration, they’ve whittled away most of what they do best, and we’re left unfulfilled.

Vernon — whose unadorned falsetto can be so staggeringly good — reverts to the heavy-handed Auto-Tune tricks he used on his own song, “Woods,” and on Kanye West’s My Beautiful Dark Twisted Fantasy, layering phrases atop a trickling bassline, hiccups of synthesizer, and a few dramatic, Purple Rain-style drum rolls.

It’s fine, unobjectionable, even pretty at times. But by the three-minute mark, the song is still just lumbering forward, devoid of the compelling plot twists that make each artist’s own work so vital, and gave us ample rationale to put Bon Iver on the cover, and name Blake one of the year’s most important new artists.

A cryptic message that appears underneath “Fall Creek Choir Boys” on James Blake’s YouTube page reads “Enough Thunder — October 2011.” Whether that’s a whole album or another song, we’re not sure, but either way, we’re still fans of both guys, so there’s still good reason to remain optimistic for whatever comes next, later this fall.