The Yeah Yeah Yeahs singer will debut her "psychedelic ride" at the Creators Project in October. 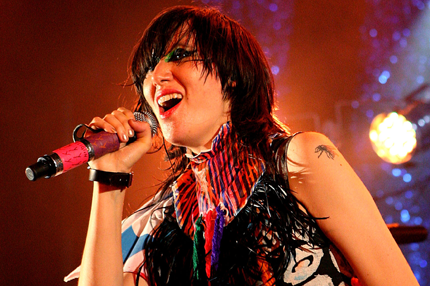 Yeah Yeah Yeahs singer Karen O is taking a break from her band to tackle a “psycho opera” for Vice and Intel’s multimedia Creators Project, which will take place at St. Ann’s Warehouse in Brooklyn, NY, from October 12-22. The singer announced her plans last month, but now reveals some details – and it looks to be her most ambitious undertaking yet.

O is teaming up with bandmate Nick Zinner and producer Sam Spiegel (director Spike Jonze’s brother) to compose music for the opera, titled Stop the Virgens, which will feature performances by members of the Greenhornes and Raconteurs, along with YYY’s drummer Brian Chase and actress Lili Taylor. Longtime designer Christian Joy is creating costumes, while novelist, screenwriter, and playwright Adam Rapp is producing.

O is still working out details, but she’s confident about overall direction. “It should feel like a psychedelic ride laced with catharsis,” she said in a statement. “There is emotional cost to our narrative so we’re aiming to engage the audience, this piece isn’t aiming to be all about spectacle or abstraction though there is good helping of both in the production. It’s aiming to have all the good stuff of escapist entertainment with a few sucker punches to the gut along the way. I’m in the camp that needs to discover and take risks, sometimes it’s with the promise of something special and new, sometimes it’s to stay awake, either way it’s much more stressful with all the uncertainty but worth the pain in the end.”

Expect the Yeah Yeah Yeahs to hit the studio hard for work on their follow-up to 2009’s It’s Blitz!. Zinner told SPIN earlier this month that the band is “writing and jamming. We all have side-projects, but it’s going great so far.”