Jay-Z and Kanye West: No. 1 on Charts

The titans of hip-hop score the top spot for 'Watch the Throne' -- the second biggest selling debut of the year. 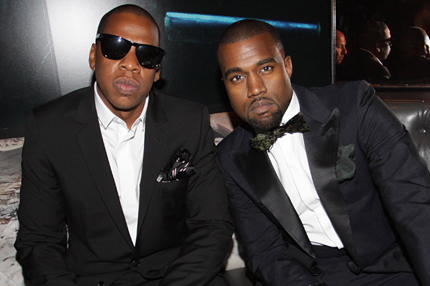 Jay-Z and Kanye West have snagged the No. 1 spot this week for their collaborative album Watch the Throne, selling 436,000 copies, according to Billboard. It’s the second-largest first-week sales for an album this year: Lady Gaga holds the top spot with 1.1 million for Born This Way.

Jay-Z and West — along with their parent label Def Jam — had an unconventional marketing strategy for Watch the Throne’s release. The album was available exclusively to iTunes on August 8, and released to regular music retailers on August 12. While iTunes does not disclose specific sales figures for downloads, industry insiders have estimated it moved 290,000 digital copies — breaking a previous record held by Coldplay for their 2008 album Viva La Vida or Death and All His Friends.

Sales for Watch the Throne were also boosted in part because the record did not leak online early. According to Billboard, Jay-Z and West went to extraordinary lengths to prevent that from happening, including asking producers and collaborators to show up in person to work on music and working in an internet-free space. The album was also not delivered to iTunes until August 5 — just three days before it was available from the service. (Leaks are due in large part to pirates getting hold of manufactured CDs from the plant ahead of street dates.)

In related chart news, Katy Perry has broken records on the Billboard Hot 100: she is the first woman in the 53-year history of the chart to send five songs from one album to the No. 1 spot. She shares that record with Michael Jackson, whose 1987 LP Bad also scored five No. 1 singles.