Nashville rockers JEFF the Brotherhood also join the project as the backing band. 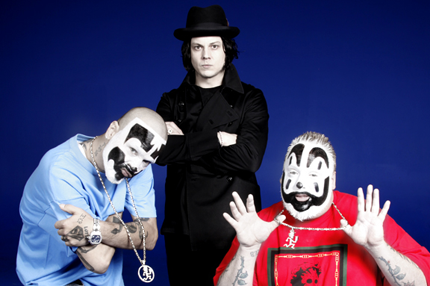 One word: Wow. Jack White is producing the new release from fellow Detroit natives Insane Clown Posse — yes, the duo in face paint rapping about murdering people with hatchets — and Nashville rockers JEFF the Brotherhood have joined the project as the backing band. Do collaborations get weirder than that?

The record will be their interpretation of a lesser known Wolfgang Amadeus Mozart piece from 1782 called “Leck Mich Im Arsch,” which is literally translated as “Lick me in the arse.” Listen below.

According to a press release, the 2011 version of “Leck Mich Im Arsch” marries “Mozart’s melody and lyrics sung in operatic German with ICP’s poignant lyrical addition in English and Jeff the B’s monster-riffs.” The B-side of the single is “Mountain Girl,” an original composition, which has ICP’s Violent J and Shaggy 2 Dope dropping verses about country life — shotgun weddings, meth addiction, and moonshine.

The 7-inch single and iTunes download of “Leck Mich Im Arsch” will be available on September 13, and 100 tri-color vinyl copies of the single will be sold at the Third Man Rolling Record Store starting September 17 at the MI Fest in Brooklyn, Michigan, where the Raconteurs will be performing. Another 50 tri-color vinyls will be randomly inserted into mail orders dispatched by Third Man Records.

White and ICP filmed a teaser video for the upcoming collaboration: “The music collaboration you’ve all been waiting for,” it says. “230 years in the making.” Watch below.