Stream the first effort from the Sleater-Kinney and Helium supergroup. 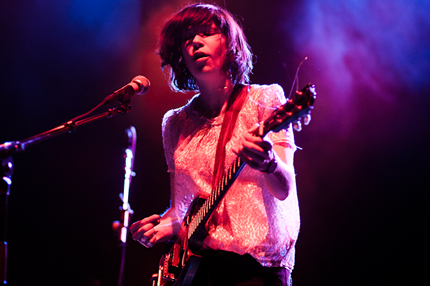 The self-titled debut from Wild Flag, the all-girl supergroup featuring Sleater-Kinney’s Carrie Brownstein and Janet Weiss, Helium’s Mary Timony, and the Minders’ Rebecca Cole. is one of the most anticipated records of the fall — and now you can hear why. NPR is offering up a full stream of the set two weeks before its September 13 release date. Head here to hear it.

Recorded live in a studio in Sacramento, CA, Wild Flag finds the group perfectly fusing their musical pasts together. Brownstein lays down searing guitar lines (you can practically see her turning out Pete Townshend-style windmills on “Romance”) and Weiss shows her fierce, pummeling drumming style has not let up since Sleater-Kinney broke up. Timony, meanwhile, revives the fractured, psychedelic pop she explored with her ’90s band Helium, particularly on “Something Came Over Me.”

As contributor Jessica Hopper notes in her 8-out-of-10 review, Wild Flag’s album comes at a perfect time when nostalgia for ’90s-era alt-rock is white hot. But the group don’t wallow in the old days. “It’d be reasonable to expect a ‘mature’ rock record from this quartet, or at least a few of the bittersweet lamentations mandatory for all ex-punks pushing 40 (call it ‘Wilco syndrome’),” Hopper writes. “Instead, Wild Flag offers odes to volume and youth (‘Romance,’ ‘Future Crimes’), suggesting the barely contained frenzy of teenagers. It’s all the fury you want, but executed with the capability and confidence of lifers.”