Girls Go for a Joyride in Gorgeous “Vomit” Video 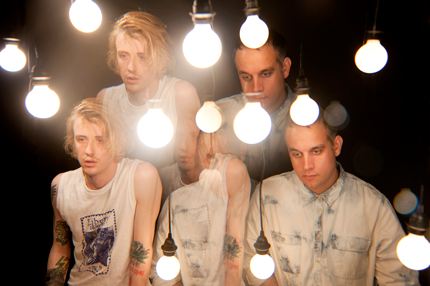 On the epic track “Vomit,” from their September album Father, Son, Holy Ghost, Girls’ frontman Christopher Owens croons “I’m looking love, looking for love.” Looks like he’s found it — in the form of a lipstick red 1966 Ford Mustang, which is the centerpiece of their gorgeously shot new video for the song. Watch it here.

Directed by Austin Rhodes, the clip offers slow-pan views of the American sports car: chrome fenders, white leather seats, glistening hubcaps and all. It’s a subtle nod to classic horror movies Christine, particularly at the 1:10 mark when the headlights blast on and it takes off for a joyride in the streets of San Francisco, seemingly without the aid of a driver. “Vomit” isn’t total auto fetish, however: Owens deigns to make a few cameos near the end of the video’s almost seven-minute video. Turns out he’s the dude behind the wheel.

Expect Girls’ full album, out September 13, to be their most immediate set of tunes yet. When SPIN caught up with Owens last month, he said, “They’re all pretty simple, obvious songs. People will hear them and they’ll understand them right away.”