Hear Lenses Alien, the second LP from one of SPIN's favorite new bands. 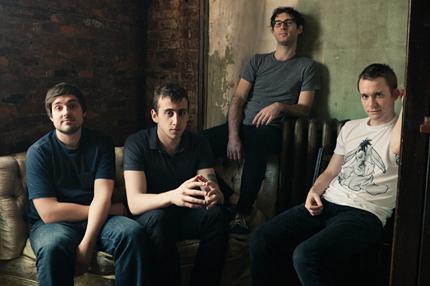 New Jersey quartet Cymbals Eat Guitars are one of SPIN’s favorite up-and-coming bands, and on August 30 the alt-rockers will release their second album, Lenses Alien, the follow-up to their well-received 2009 debut Why There Are Mountains. And since waiting is totally overrated, SPIN has a stream of the entire LP now. Listen below!

While Why There Are Mountains was primarily driven by singer-guitarist Joseph D’Agostino, Lenses Alien is more of a collaborative songwriting effort between D’Agostino, drummer Matthew Miller, bassist Matt Whipple, and keyboardist Brian Hamilton. “Part of why it sounds sort of unique from the first record is because it’s the four of us learning to play together and write parts that are complementary,” Whipple says. “We are vibing off each other as musicians.”

D’Agostino and Miller met in high school, then spent their college years playing “shitty little shows” at the Stone Pony in Asbury Park, NJ, with a series of bandmembers recruited via Craigslist. The lineup was solidified in 2009 with Whipple and Hamilton.

Lenses Alien is influenced by the members’ favorite bands, from Pavement and Spiritualized to Modest Mouse and… alittle group from Chicago.

“Every song that I write, I’m trying to write a Wilco song,” D’Agostino jokes. “Brian [Hamilton] hates Wilco, so he does everything to thwart me.”