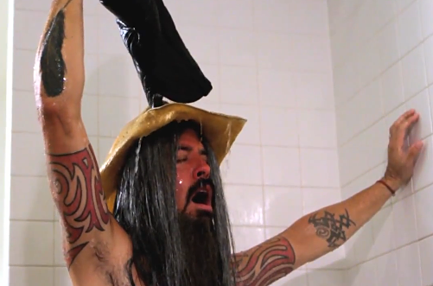 The Foo Fighters are the kings of the comic music video, from classic clips like “Learn to Fly” to their VMA-winning one for “Walk,” a spoof of the Michael Douglas flick Falling Down. But Dave Grohl and Co. may have revealed their most insane clip yet. Ever want to see the guys drop trou and lather each other up with soap in a rest stop shower? Today’s your lucky day.

The “Hot Buns” video isn’t a music video per se – it’s an announcement for the group’s North American tour this fall. But they’ve created a short that is sure to grab attention and hopefully sell some tickets: The guys hang out in a truck stop sporting white trash wigs and trucker hats, before heading to the shower for some R-rated action. Guitarist Pat Smear looks horrified by what he discovers.

If you can’t bring yourself to watch the clip for the tour announcement, those dates are posted below. The 27-date trek of arenas kicks off September 14 in St. Paul, MN, and wraps up on November 16 in Boston, MA. Rise Against, the Joy Formidable, Cage the Elephant, Social Distortion, and Mariachi el Bronx will open select dates.