Pick up a ten-track set from the guy who wrote "Umbrella" and "Single Ladies" -- guests include Big Sean and Pharrell. 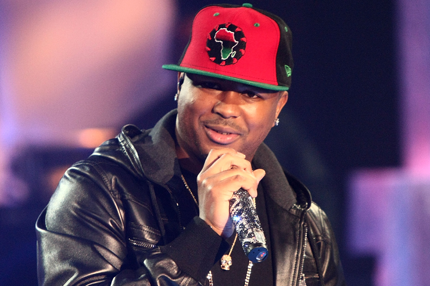 R&B crooner The-Dream revealed earlier this month that his fourth studio album has been delayed by his label due to “contract negotiations.” But the songwriting pro (who’s penned hits like Rihanna’s “Umbrella” and Beyoncé’s “Single Ladies”) has offered up the next best thing: a free 10-track album, released under his real name Terius Nash. The set, titled 1977, is available for free download over at his official site.

Nash tapped Big Sean and Pharrell to guest on a few of the tracks and 1977 is an awesome set of futuristic R&B, with glossy synths, programmed beats, and wonky production over Nash’s soulful croon and emo confessionals. Early highlights include the “Used to Be,” where Nash laments a lover who “used to be anti-internet but now you constantly bloggin’ and shit,” and “Wish You Were Mine,” which pairs dissonant melodies and his seductive croon with the kind of rowdy “whoo ooo ooos” that’d befit a Lil Jon rave-up.

While his official album The Love IV: Diary of a Madman is due out sometime this year, Nash says he’s shot videos for tracks for 1977. Expect those to be rolled out in the coming weeks.