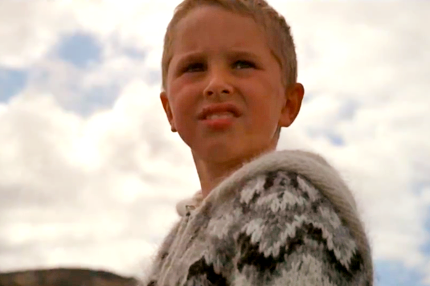 Here’s one the Icelandic Ministry of Tourism will appreciate: Bon Iver’s new video for “Holocene,” which follows a young boy as he explores the island nation’s breathtaking countryside. Watch below!

It’s a stunning five-and-a-half minutes of vast green plateaus, floating icebergs, rocky ocean beaches, and other scenic beauty. You can almost feel the damp moss squishing beneath your feet. The video — fittingly premiered at National Geographic — is a perfect match for the atmospheric folk song from the Wisconsin band’s self-titled album. “I could see for miles, miles, miles,” frontman Justin Vernon sings in his warbling falsetto.

It’s a busy time for the Bon Iver leader and recent SPIN cover star: In addition to touring non-stop since July (he’ll continue in the U.S. and Europe this fall), he’s planning to release a collaboration with London’s soulful DJ-producer-singer-pianist phenom James Blake, who was picked as one of SPIN’s Next Big Things in 2011.

Announced by Blake via Twitter, the collabo is called “Fall Creek Boys Choir” and is due out August 24. No other details have been announced.