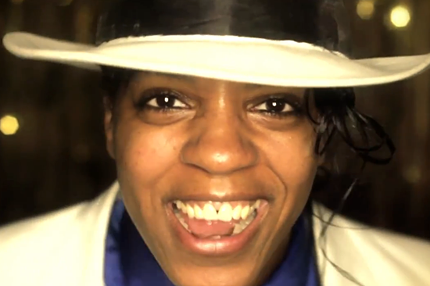 The third solo album by British punk icon Poly Styrene, Generation Indigo, dropped just one month before her death this past April. One of its best tracks, “Ghoulish,” is inspired by another death — Michael Jackson’s. And now the two are memorialized in the track’s new video, starring a motley cast of MJ impersonators.

Before her death, Styrene, the former leader of pioneering punks X-Ray Spex, discussed the track in a YouTube interview. “There were all these pictures of [Jackson], and the nose had fallen off, and the white face, and the ghoulishness,” said Styrene, who had never met the “Thriller” singer. “I see through that; he was probably quite a nice guy.”

The lyrics to “Ghoulish” mirror her sympathy: “I can see through your disguise / I can see you’re quite a nice guy,” she coos. And so does the video, reworked by director/SPIN contributor Lauryn Siegel after Styrene’s death: Rosy-cheeked girls, chubby bearded men, and all sorts of unlikely MJ devotees audition as impersonators. Dressed in sequined gloves and suits, they perform the King of Pop’s iconic dance moves and lip-synch to Styrene’s lyrics, while the judges shake their heads and comment, “Chubby bubbles!” or “More crotch!” It’s a fitting tribute to ‘em both.

“Ghoulish” will be re-released as a digital EP on August 8 along with a remix by Hercules and Love Affair.