Watch the actor and host tear through more than a dozen hip-hop classics on 'Late Night With Jimmy Fallon.' 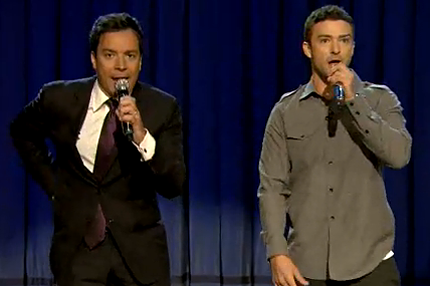 Justin Timberlake dropped by Late Night With Jimmy Fallon yesterday, but the pop star-turned-actor had more than his new movie Friends With Benefits on his mind. Timberlake wrapped up his chat session by reviving the awesome “History of Rap” duet with Fallon — the medley of hip-hop classics that they debuted last September. Watch it here.

“It’s not gonna happen — we can’t do it again, we can’t top [it],” Timberlake jokes, before the pair grab some mics and leap out onto the floor. From there, the duo (with the Roots providing ace back-up) seamlessly rip through more than a dozen rap classics, starting with Kurtis Blow’s “The Breaks” and wrapping things up with Biz Markie’s “Just a Friend.” 50 Cent’s “In Da Club” doesn’t quite catch on with the ballistic crowd, but it’s a blast to watch them take on Salt-n-Pepa’s “Push It.” And if the late night thing doesn’t work out, Fallon may have a second career as hip-hop’s next hook girl, judging by his falsetto skills on Rob Base and DJ E-Z Rock’s “It Takes Two.”