The Strokes Get Psychedelic in Wild Clip

Check out the New York rockers' latest video for "Taken for a Fool." 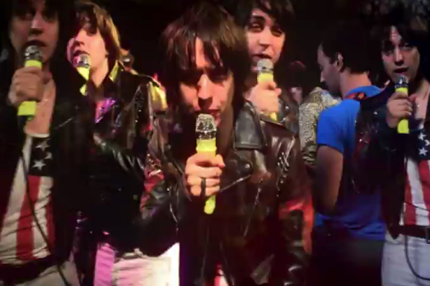 In their previous video for “Under Cover of Darkness,” from their killer comeback album Angles, the Strokes dressed up and went to the opera. But they’re in a goofy, psychedelic mood for their latest video “Taken for a Fool,” which debuted today. Check it out here.

The clip is a feast for the eyes: It looks like the bandmembers, who rock out alongside digital replications of themselves, have been placed in a 1980s holographic video game,as cameras swirl in a dizzying circle.Frontman Julian Casablancas,who’s typically stoic and unanimated on stage, looks to be having a total blast. Watch him beam from ear-to-ear (and awkwardly pose high school prom-photo-style with bassist Nikolai Fraiture) towards the video’s end.