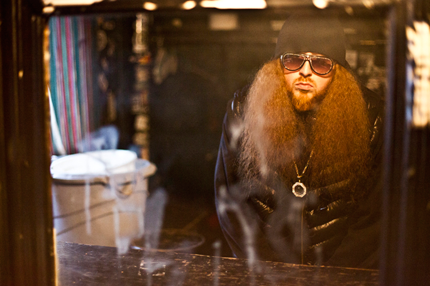 With his debut mixtape White Jesus, Rittz has established himself as one of Southern hip-hop’s most promising new stars, thanks to a masterful double-time flow that’s earned him props from Yelawolf. (His cartoonish mop of red hair doesn’t hurt either.) Most of his tracks tackle hilarious themes like “taking a ho” to see Twilight and getting stoned in his Caddy, but on “Geronimo,” which SPIN is premiering, the 30-year-old Georgian tackles way weightier subjects. Download it here.

Over a slow-burning groove, Rittz unspools one of his darkest confessionals yet: He opens up about his struggles with booze and a dwindling bank account. Things get more intense in the track’s second half, when he chronicles a young woman contemplating suicide after an unwanted pregnancy. “The first verse is definitely autobiographical and the second was storytelling, but the stories were inspired by real people in similar situations,” Rittz tells SPIN.

The rapper teamed up with his frequent collaborator DJ Burn One, and while they typically cook up banging “country rap” beats, they switched things up for “Geronimo,” which has more of a rock edge. Burn had originally written the song for Atlanta-based group Anamul House, but once Rittz heard it, he snatched it up. “When they played it for me I instantly came back with a hook and told them I gotta have that track,” Rittz says.

For the rest of the year, Rittz will continue touring, including a trek in late September with Yelawolf, who’s signed him to his Slumerican imprint. Check out dates below, and read SPIN’s Breaking Out feature on Rittz here.