Since forming in Chapel Hill, NC, during the heady days of grunge and alternative rock in the early ’90s, Archers of Loaf have become godheads of sorts to independent musicians everywhere, as revered as icons like Sonic Youth and Pavement.

This month, the crew are hitting the road for a reunion tour, following their surprise appearance at North Carolina’s Cats Cradle in January. They’re also gearing up to reissue all four of their classic albums, starting with 1993’s Icky Mettle in August.

But frontman Eric Bachmann isn’t one to live in the past. He’s constantly discovering new bands, whether they are ambient DJs or experimental rockers. SPIN caught up with Bachmann and asked him to discuss some of his favorite under-the-radar acts.

DJ /RUPTURE
Bachmann discovered this New York-based DJ through his 2009 album Patches, which he cut with the Ex guitarist Andy Moor. “It provided the soundtrack for a good chunk of the touring we did in 2010 and consequently turned me on to Rupture’s diverse musical world,” says Bachmann of rupture, who blogs regularly at Negrophonic and hosts a weekly radio show on New Jersey station WFMU. Bachmann’s top rupture records? “Minesweeper Suite, Solar Life Raft, and Uproot are my favorites, but the guy sounds inspired on everything I’ve heard from him.” 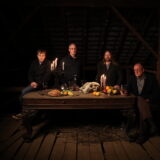 LITTLE WHITE TEETH
Bachmann came across Phil Beaumont of San Diego, CA-based folk-drone group Little White Teeth when Bachmann performed with Crooked Fingers in the early ’00s. “He was this intimidating figure that looked like Dirty Harry-era Clint Eastwood, sporting the big chops and mirror sunglasses and the snarl,” Bachmann recalls. “He was grunting and unfriendly and seemed like the kind of character who might carry a .44.As it turns out, the poor bastard was actually pissed off because he had to load a giant Hammond organ into and out of the venue every night, not because of any chronic misanthropy.”

Beaumont has since ditched the Hammond and added Black Heart Procession’s Dmitri Dziensuwski, Album Leaf’s Matt Resovich, and Yuko Sugiyama to the lineup. “They make the best kind of music for driving through the desert,” says Bachmann. “Especially during twilight hours.”

LHASA DE SELA
From 1997 through 2009, this singer-songwriter delivered genre-crushing albums that flirted with Mexican folk music, Klezmer, rock, torch songs, and Middle Eastern pop. But breast cancer claimed her life in 2010 at the age of 37. “She is not new or old,” says Bachmann. “She is timeless and without her there is a great void. I miss her.”

HOLY SONS
Emil Amos used to play with Portland, OR, roots-rockers Dolorean, but with his side-project Holy Sons, the guitarist crafts what Bachmann describes as “great hangover music.” “With Dolorean, it was striking and refreshing to hear someone playing expansive, ambient guitar arrangements over well-crafted, traditional singer-songwriter material in a way that you wouldn’t expect, yet it fit perfectly. Funny thing is he’s as good a drummer as he is a guitarist; and if you’ve heard him play guitar then you know how remarkable that is.”

FLYING LOTUS
Steven “Flying Lotus” Ellison is a turntable-spinning, sampler-using, drum-machine-wielding, laptop-rocking auteur, whose sprawling, gorgeous instrumentals, which flirt with everything from jazz to ambient techno to hip-hop, have been used most famously as bumpers on Adult Swim. It’s hard to describe his music in words, but Bachmann has a story that perfectly summates his expansive sound:

“At dusk there is a giant owl that roosts on a tree just a few feet off of our back porch.The moon has been waxing lately and the great bird’s silhouette is so sharp some nights that you can almost see the barbs of her feathers creating scraggly shapes against the night sky.Occasionally she spreads her massive wings to span the entire length of her tree’s limb and growls and hoots as if she wants me to start some sort of conversation with her.

“What animals do you like to eat?” I ask.

“What is your favorite season?

“Who is your favorite DJ?”

And without any hesitation, effort, or sound she responds stoically, “Field mice, baby king snake, autumn… and, of course, the Flying Lotus.”

archers of loaf, The Lists