Anthony Kiedis and Co. prove they've still got it on the first song from their 10th studio album, 'I'm With You.' 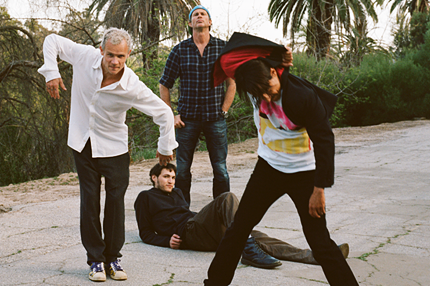 The Red Hot Chili Peppers will end their five-year hiatus on August 30 when their 10th album I’m With You hits stores. But the first track from the album, “The Adventures of Rain Dance Maggie,” has hit the web now; hear it below.

Touring member Josh Klinghoffer has joined the band full-time – he replaced longtime guitarist John Frusciante – and his soaring solo on this tune is reminiscent of George Harrison on the Beatles’ classic “Something.” The chorus of the song – “Heeeeey, now, you’ve got to make it rain somehow!” Anthony Kiedis croons over Chad Smith’s propulsive, scissor step beat – proves the Chili Peppers are still masters of funk-rock. Also: cowbell!

PHOTOS: Check out rare and candid pictures of the Red Hot Chili Peppers through the years.

Last month, bassist Flea told SPIN that the band’s hiatus helped reignite their approach to music. “[The album] has deep heart,” he said. “Everyone in the band has grown and continued to reinvent themselves and become a better musician, and collectively we did. We were forced to.”