The duo also release revealing behind-the-scenes documentary on the making of their upcoming album 'Watch the Throne.' 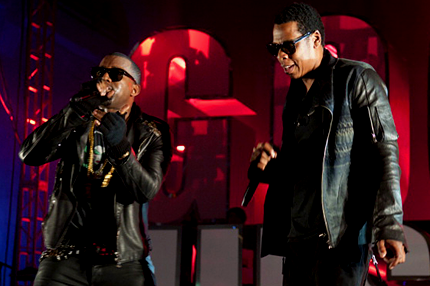 With their collaborative album Watch the Throne now due out August 8, Jay-Z and Kanye West have announced plans to tour behind it — and the duo, calling themselves “the Throne,” will hit the road for a massive 24-date nationwide arena tour that kicks off September 22 in Detroit. Tickets will be available at Ticketmaster and Live Nation starting August 8, and fans who purchase seats will also receive a digital copy of the album. Dates below.

In related news, Jay and ‘Ye have released a behind-the-scenes documentary for Watch the Throne. The 10-minute clip follows the pair around the world as they recorded the set and features scenes of them celebrating Jay’s birthday with his wife Beyoncé. Other highlights include Jay reflecting on watching his protégé’s career soar (“It’s fantastic!”) and the duo laying down tracks in the studio.

Watch It: Jay-Z and Kanye’s Watch the Throne Documentary