Watch "I Touch a Red Button Man," set to the NYC band's "Lights," a result of their Coachella partnership. 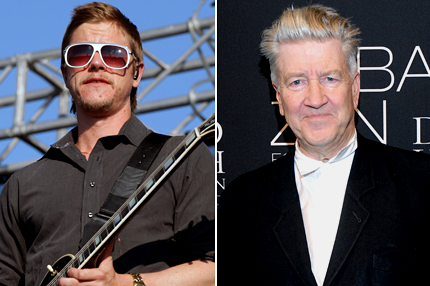 During Interpol’s set at the Coachella festival in April, a short film directed by David Lynch played along with the band’s performance of “Lights,” a song off their self-titled fourth album. Now, the clip has been released on the web. Watch it below.

Interpol guitarist Daniel Kessler told the Huffington Post, who premiered the video, that his band has long craved a major cinematic collaboration, and that Lynch has always been atop their list of desired partners. “We’re all big fans of David,” said Kessler. “It’s a common point, one of those things that’s unanimous.”

After first meeting Lynch three years ago, the band had no qualms about giving him creative control over the project. “We wanted to do our half and provide the music, and the second half would be… you know, visual autonomy by David Lynch,” said Kessler. “I was kind of blown away by just seeing it.”

The mostly black-and-white animated short film stars a panicky character based on one of Lynch’s sketches. Bursts of red fill the screen each time he pushes a red button.

As for the story behind the video’s mysterious red button man: “I think it’s supposed to be left a mystery,” said Kessler. “People listen to songs, you know, and try to piece things together. We’d rather not spell it out for them, so people don’t listen to the song and try to figure out where it matches what we were saying.”