At Home with Stephen Malkmus 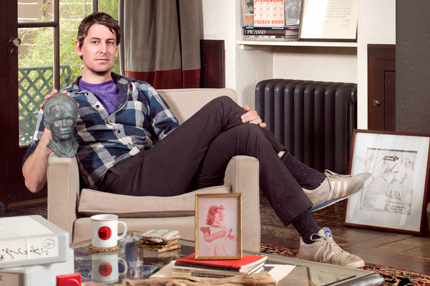 Now recovered from a busy 2010 touring the world with Pavement, Stephen Malkmus invited us into his Portland, Oregon, home, showing off musical paraphernalia like his favorite guitars, original tape reels from his recordings, sculptures by his wife, artist Jessica Jackson Hutchins, and a signed Captain Beefheart record, which he got in a trade with Pavement guitarist Scott Kannberg. Watch the video tour below!

The singer-guitarist has also got some sporting interests. While clutching his mitt, Malkmus revealed he’s in a Portland softball league that he thinks is a prime target for skewering on the popular IFC comedy Portlandia.

On the musical front, Malkmus is back with his trusty Jicks — and had an ace in the hole for their new record. “Beck called about two years ago,” explains the singer-guitarist, 45. “He was like, ‘I’m a producer now, and I’d like to work with you.'” The long-gestating Mirror Traffic (Matador) is the wonderfully succinct result. “I can try to be a big psych-rock shredder,” says Malkmus. “But I decided to make it more about melody. That could be what I’m better at.”