Hear "Behold the Hurricane," the punk rocker's first taste of his new side-project, the Horrible Crowes. 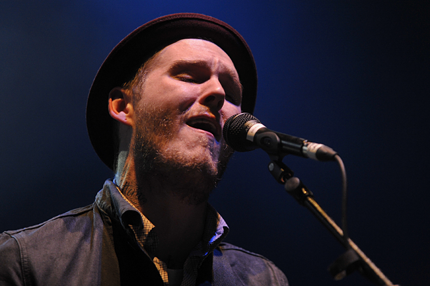 Gaslight Anthem frontman Brian Fallon announced earlier this year that he was stepping out with a new side-project dubbed the Horrible Crowes, whose debut album Elsie is due out this fall. Now, he’s debuted the first track, titled “Behold the Hurricane,” which you can hear here.

The 31-year-old singer-songwriter told SPIN earlier this year that the record was a “radical” departure from Gaslight’s stuff, but fans of the blue-collar punks (and Springsteen) will find plenty to like on “Hurricane.” It’s an anthemic, mid-tempo rocker, powered by chiming guitars, a heavy pulse, and Fallon’s stadium-ready ooh ooh oohs.

Expect the rest of Elsie, which features Gaslight roadie Ian Perkins on guitar, to explore far more experimental terrain. Fallon told SPIN that he was inspired by gothic-soul songwriters like Mark Lanegan, and Tom Waits while tracks like “Go Tell Everybody” sound like Nick Cave covering Marvin Gaye. “It’s definitely out there,” Fallon said. “There are song structures, but it’s not what you expect from me at all. Someone’s either going to get pregnant or want to steal a car listening to this record.”

Hear It: The Horrible Crowes, “The Hurricane”