Download "Hollowed Out," the shimmering new song from the Kiwi band's sophomore album. 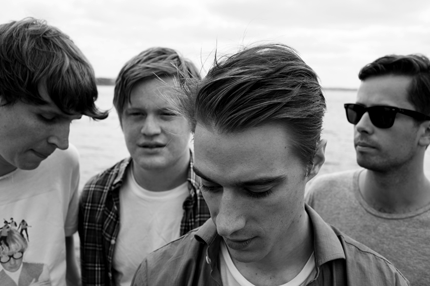 New Zealand is a long way from the hub of American rock’n’roll, but that didn’t stop Kiwi quartet Cut Off Your Hands from making an impact here when they emerged a few years back, landing on SPIN’s Big in ’09 list. Next month sees the release of Hollow, their chipper sophomore set, which includes the glistening “Hollowed Out.” Download it here.

“Hollowed Out” sounds inspired by the ethereal post-punk of Echo & the Bunnymen, with acoustic guitar strums and crystalline lead riffs winding around each other, bolstering frontman Nick Johnston’s reverb-soaked vocals about a man coming undone. “It’s about an anxious feeling of being cut down, or gutted, of experiencing immense failure, and how that might pull you to the ground,” Johnston tells SPIN.

Surprisingly, this tune about failure helped propel the entire album forward. “That song is one of my favorites on the record,” Johnston says. “It was written at a time in the process when I couldn’t really see how we were going to finish the record, so that song gave everything some momentum again.”

If you dig “Hollowed Out,” head to the band’s Facebook page to download their free EP. You can also watch the video for the album’s first single, “Fooling No One,” below.

WATCH: Cut Off Your Hands, “Fooling No One”