Michael Todd allegedly held up a Walgreens outside Boston and demanded Oxycontin. 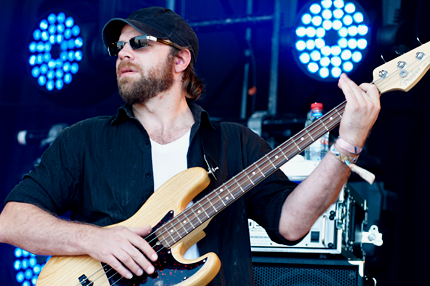 Coheed and Cambria bassist Michael Todd was arrested Sunday night for allegedly robbing a pharmacy outside Boston — just hours before his band was scheduled to take the stage at the Comcast Center, where they were opening for Soundgarden, the Boston Globe reports.

Attleboro, MA, police responded to a robbery report at a Walgreens around 1 P.M. on July 10, when Todd, 30, allegedly demanded Oxycontin and threatened pharmacists with a fake bomb. “The male was given six bottles of pain pills,” police told The Hollywood Reporter.

A passerby then spotted Todd fleeing the scene in a taxi, which police tracked to the backstage area of the Comcast Center. Todd was then arrested and charged with armed robbery and possession of a controlled substance. He is being held on $10,000 bail.

After the Boston show, during which a guitar tech sat in for Todd, Coheed and Cambria posted a message about the incident on their website.

“Michael Todd was arrested today on what we consider very serious charges and therefore he will not be finishing up the current tour,” they wrote. “Wes Styles, longtime member of the Coheed family, will take on bass duties starting tomorrow for the remaining dates. No shows will be canceled.?? We are surprised to say the least and will address the situation with Michael after the tour. For now, we just want to have a great time out here and finish with some killer shows.”

Todd has had struggles with addiction in the past. In 2006, he left the band’s European tour and checked into a rehab facility to treat a heroin addiction.