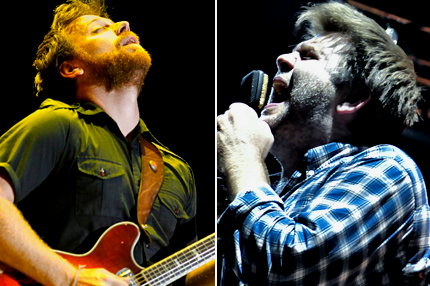 TV on the Radio, Deadmau5, the Black Keys, Patti Smith, and Cee Lo have been tapped to headline this year’s Virgin Mobile FreeFest, a free one-day music event that will take place on September 10 at Merriweather Post Pavilion in Columbia, MD. The lineup was revealed by Virgin founder Sir Richard Branson in a YouTube video, which you can watch here.

The Virgin Mobile FreeFest has one of the most diverse rosters of indie-centric bands this season. Rounding out the bill are British up-and-comers Bombay Bicycle Club and Two Door Cinema Club, Australian psych rockers Empire of the Sun, Swedish electro-pop act Teddybears, and Australian dance-punk outfit Cut Copy. While Big Sean is the lone hip-hop artist on the roster, James Murphy will be making a return after LCD Soundsystem’s ‘final concert’ to perform a solo set. The performers will be spread out across two main-stages as well as a “dance forest” for the line-up’s electronic acts.

Tickets for the fest will be given out via Virgin Mobile Live Facebook Page starting July 15 at 10 A.M. EST. Select Virgin customers and past Virgin Fest winners, meanwhile, will be eligible for a private “free-sale,” which starts July 14. For fans willing to pony up some cash, organizers are offering Premium Ticket Packages for $49.50, which will allow for early access to the grounds. Those packages will be available from Merriweather Post Pavilion and Ticketfly.

Read up on our coverage of Virgin FreeFest from past years here.